Before I crossed the Nullarbor, everyone had an opinion to tell me.  This 1200km stretch of road through the Australian desert, between Ceduna in South Australia and Norseman in Western Australia (and with not much in between), is renown for being long and straight.  There were those who warned of boring days (or one extra-long day).  However, there were others who recommended that crossing the Nullarbor was a must-do journey.  Only doing it myself would determine what I thought of this classic Australian road trip.

Note: Not all of these ideas are dog-friendly, I will soon be sharing dog-friendly tips for driving across the Nullarbor.

Setting Out From Ceduna

My partner and I started our crossing in Ceduna, a rough but major town on the Great Australian Bight. It partially exists just to serve as a refuelling and loading up point for people departing across the Nullarbor.  We stayed the night in Ceduna, as we needed to visit a proper supermarket and the post office.  However, after the manager at the caravan park informed us of the number of security cameras installed, it may have been better to stay at one of the more peaceful spots along the coast from Ceduna, such as Smoky Bay or Fowler Bay.

Intending to take our time, stopping at the points of interest along the way, we didn’t rush to leave Ceduna early the next morning.  Instead, we dropped in to the Wombat Fauna Rescue Homestead, a local wildlife rescue organisation, to check out the orphaned and injured hairy nose wombats in their care.  The wombats are absolutely gorgeous, and it was a privilege to hear the stories about the little creatures.

A Bite of Whale Watching

Whales at Head of Bight, so far away but still so massive!

Getting onto the road mid-morning, the only town you pass through is Penong, a normal small country town 76km west of Ceduna, with a dusty school and a scattering of houses. Along the road to Penong, and for the next couple of hundred kilometres, you still continue to see paddocks with shoots of crops, plus scatterings of trees and bushes.  There aren’t yet any plains that I would describe as tree-less. I felt impatient to reach the true Nullarbor plains ahead of us.

We arrived at the whale-watching platform at the Head of Bight, about 300km west of Ceduna, in time for a late lunch.  An excellent place to stop along the highway between the months of May and October, large numbers of whales visit the bight each year for the females to give birth. The waters are declared a Marine Park.  After paying a reasonable entrance fee we strolled down to the platforms built along the tops of the 65m high cliffs.  We could clearly see a mother and a calf, plus another four whales relaxing in the ocean only a short distance from the cliff base. If we’d arrived even later in the season (it was still only early June), we were told that up to 100 whales at a time sometimes gather in the waters.

Rain Showers on the Nullarbor

Beautiful red earth on the Nullarbor, with a distant rain shower

Returning to the highway, our next stop was just down the road at the Nullarbor Roadhouse for petrol and a beer.  It is here that the Nullarbor proper (the treeless plain, with no further trees or crops) starts.  Heading on into the west with the afternoon sun, we put on some classic ACDC at high volume, hoping to make it most of the way to the border before the end of the day.  The stereo blaring, the sky big and blue, it felt so much like the true Australia.

As we covered the kilometres, we started to see rain showers off in the distant, moving towards us from the far-off horizon.  The horizon was so far away on this huge stretch of plain that I was able to spot up to three rainstorms visible at a time.  Occasionally, we drove through one of them, the rain falling heavily down on our windscreen. Although just for a brief while, until we left it behind.

Rain on the Nullarbor

The Bunda Cliffs & the Border

As the road veered closer to the ocean, we stopped at one of the roadside lookouts to take in the view of the spectacular Bunda Cliffs.  The Nullarbor is formed from an uplifted limestone seabed, with the high sea-cliffs marking the edge of the raised plain. Originally we had planned to camp at one of these desolate lookout points. But the combination of windy weather, hard ground and the possibility of further rain storms put us off, and we continued on our way.

At the Border Village, just before we reached WA, we stopped to cook and eat dinner for the evening.  This was because in only a few hundred metres, we had to hand in our remaining fruit, vegetables and honey at the westbound quarantine point.  (For eastbound visitors, the quarantine checkpoint is not until Ceduna. But still keep it in mind when buying fresh produce.)  Crossing into WA after dark, we pulled up at Eucla. 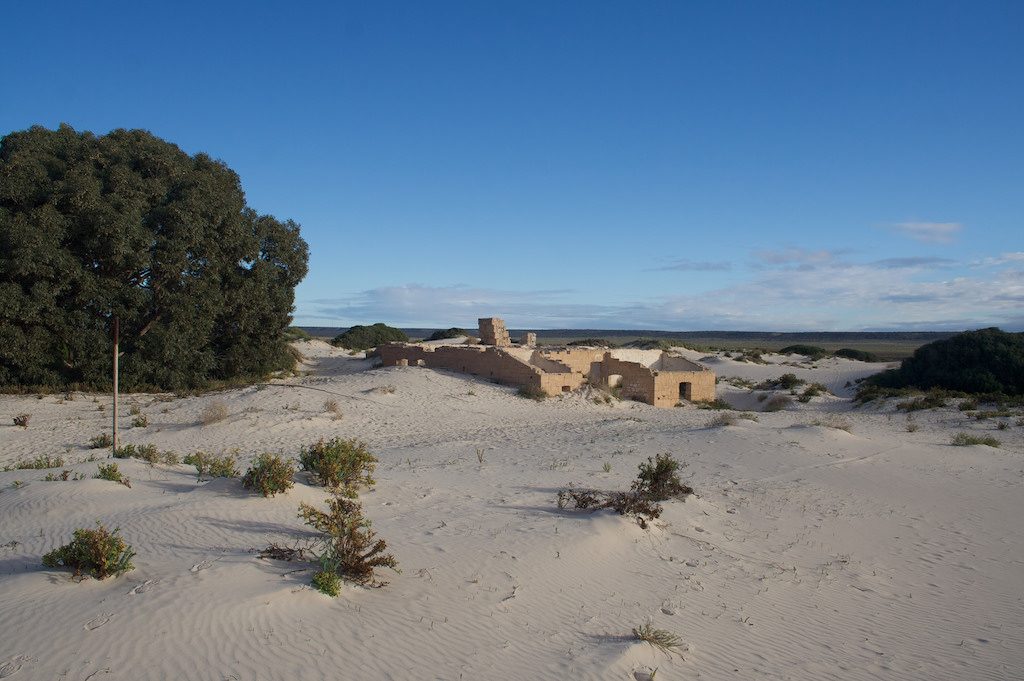 Ruins at Eucla amongst the shifting sand dunes

Eucla is the largest town along the Nullarbor, with a population of about 50 (or maybe even 60?) people. We spent the night camping in the town’s campground, just 13km past the border and 500km into our journey. It’s my pick of the places to stop for the night, because the presence of permanent residents stop it from feeling like yet another soulless roadhouse. It also means that there are better facilities than elsewhere, including a nine-hole golf course. And most importantly there’s a lively, inviting bar to relax in for the evening.

Rising early next morning (we gained 45 minutes at the border, plus would gain another 45 minutes soon along the road), we headed down towards the coastline, to check out the Eucla telegraph station ruins.  Opened in 1877, the telegraph station was the reason for Eucla’s establishment. During its days of operations it was one of the busiest telegraph stations outside of Australia’s capital cities.  These days, the shells of the buildings hunker down amongst the advancing dunes, slowly disappearing beneath the sand, showing why the town was moved further inland to a hilltop.

We headed back on the road, aiming to complete the entire 700km run to Norseman, the next major town and the end of our crossing, in one day.  This would be the harder 700km, with no whale watching to break up the journey. Just five roadhouses to stop at spaced out along the highway.  As we eased into our long day of driving, the cliffs moved inland from the shoreline. About mid-morning at Madura we reached the prominent escarpment, ascending to the top at Madura Pass. We stopped at the lookout for a view down below.

The most interesting discussion point of the morning was the fair amount of variation in the price of petrol at the different roadhouses. We made the mistake of not filling up at Eucla or Mundrabilla Roadhouse with their “cheap fuel” signs. At Madura roadhouse, where we eventually needed to fill up, the petrol was about 15c dearer per litre.  (Further down the road at Balladonia, it is 15c more per litre again, thanks to being the only petrol in 350km. Making it among the most expensive in Australia.)

The Longest Straight on the Nullarbor

No shortage of kangaroos in Cocklebiddy!

We stopped for lunch on the other side of Caiguna Roadhouse at a “blow hole”.  The blow holes are places where the caves riddled through the limestone plain have openings at the surface. Air is meant to be felt “blowing” into the underground cavities, although I couldn’t feel anything at this one.  As we headed ever onwards, there was not much else to break up the kilometres, until the sign for the famous “90-mile straight”. At 146.6km long, it’s the longest straight stretch of road in Australia (and amongst the most boring), with the sign worthy of a photo break.

Our muscles felt sore from the hours of sitting, prompting us to get out of the car at least every hour or two for a quick stretch. As some rain showers came and went I wished that we still had big open skies above us, instead of dull, grey clouds.

The Final Stretch of Crossing the Nullarbor

At Balladonia, the final roadhouse along the Nullarbor crossing, there is a Cultural Heritage Museum. It’s quite interesting and well worth at least half an hour’s break from driving.  One of the most interesting exhibits is about the crash landing of debris from NASA’s Skylab near the roadhouse during 1979, which brought a lot of treasure hunters to the area. Plus there’s displays on Aboriginal culture, the early explorers, the Afghan cameleers and other historical aspects of this remote area.  But not too remote: the first proper cappuccinos along the Nullarbor showed that we must be getting back to civilization soon.

The final stretch of the road to Norseman is edged with scrub – it’s definitely no longer a treeless plain.  Unfortunately, their closeness to the road means that there isn’t much to see. We had to rely on our endless supply of music to entertain us. Finally, as dusk was falling, we arrived in the gold-mining town of Norseman.  It felt almost cosmopolitan after the vast emptiness we had driven through, although we’re definitely still in the outback based on the upcoming girly shows at the local pub.  Our 1200km journey completed, its time to crack open a nice bottle of wine, and treat ourselves to some proper beds for the night.  A journey that was well worth doing, but I was glad it was over! 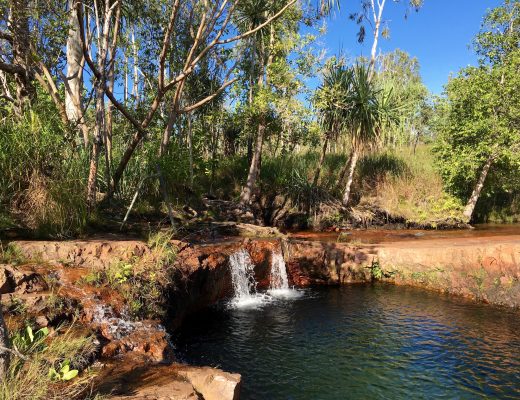 The Travelnuity Guide to Western Australia