A Tour of the Historic Houses of Negros Occidental

Back in the early 19th century, the Philippine island of Negros was far from prosperous. It consisted mainly of forest and a scattering of poor communities along the coastline. But all that changed in the 1850s when Nicholas Luzy, the English vice-consul, determined that the island had the perfect weather and soil to grow sugarcane. Rich landowners and entrepreneurs from Iloilo on the neighbouring island of Panay flocked to Negros to run sugarcane plantations. The sugarcane industry that still exists to this day was established, plus the beautiful historic houses of Negros Occidental constructed.

To house their large families and flaunt their wealth, these sugar cane barons built large mansions. They were mainly built in Silay, due to its long pier for loading the sugar onto ships, at 1.7km long the longest in Asia at the time. But after WWII when the pier was bombed, the main metropolis of Negros Occidental (the north-western half of the island) moved a short distance away to Bacolod. Left behind were the old mansions, some no longer occupied and falling into ruin. Not that they were entirely neglected: when there was a proposal to widen the main road in the 1970s, which would have destroyed many of the old houses lining it, a petition was raised by the residents. The road widening never occurring and many of houses preserved.

Note: The author was a guest of the Tourism Promotions Board Philippines.

The Gaston Ancestral House and its front gardens

These days the most magnificent of the historic houses of Negros Occidental that can be visited is the Gaston Ancestral House. It has been turned into the Balay Negrense Museum. A huge mansion, it contained 11 bedrooms to fit the 12 children (but only a single bathroom!). It was built in a variation of the Spanish Provincial style, which typically consists of coral blocks on the bottom level (but concrete for this house) and wood on the top.

Built in 1897, it was abandoned in the 1970s, but was restored in order to become a museum. It has also been decked out with period furniture donated by the local community. Inside, a grand staircase that branches into two flights leads up to the top floor and living space, amply aired by the large windows and sliding panels beneath them, looking down into the large garden and originally offering vistas of the sea.

Selection of pies at the El Ideal Bakery

Not far away is another heritage house, the Locsin Ancestral House, but it’s history differs greatly to the Gaston Ancestral House. Back in the 1920s, its owner, Cesar Lacson Locsin, and his two sisters started a bakery on the premises. It has since grown over the years but is still owned and run by the family, known as the El Ideal Bakery. It’s worthwhile stopping at just for its guapple pie. Made in the style of apple pie but using guapple, an oversized type of guava, it’s simply scrumptious! This sugar growing region is well-known for its cakes and other sweet treats (supporting the local industry, of course).  There’s plenty more tempting cakes displayed at the counter, plus shelves of sweet goodies to take-away.

Want to try more delicious Filipino food? Check out everything you need to know about Filipino street food!

Shelves of sweet goodies to buy

The Ruins by night

Further away on the outskirts of Silary, stands another must-visit of the historic houses of Negros Occidental. As the name, “The Ruins”, gives away, this is no longer a standing house, not even renovated and restored. Originally the Don Mariano Lacson Mansion, this Italianate style mansion was erected by Don Mariano Lacson in 1920, in memory of his wife, Maria Braga, who passed away while pregnant with their 11th child. For this reason it has been dubbed “the Taj Mahal of Negros”. Sadly, it was set alight during WWII by guerrillas, on instructions from the American military to prevent it being used by the Japanese as a base, like a number of the large houses in the region. The resulting fire burnt for 3 days, due to the hardness and thickness of the floors, but still the entire frame was left standing.

Over the years it was never demolished, with the surrounding plantation simply divided between subsequent generations of the family. Then just over 10 years ago, the current owners cleaned the remains and restored the magnificent garden, and opened it to the public. A beautiful and romantic spot, with a restaurant and bar on site, it’s especially enchanting to visit at sunset and after dark, when the ruins are softly lit up and perfect for photography.

The original fountain has been restored at The Ruins

Note: The author was a guest of the Tourism Promotions Board Philippines.

For another beautiful historic site in the Philippines, check out my photos of San Agustin Church 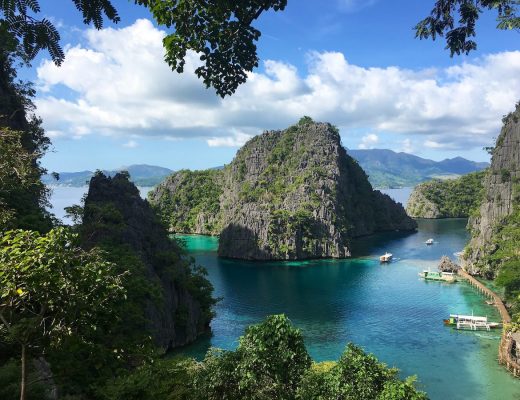 Palawan vs Maldives: Where Should I Visit?