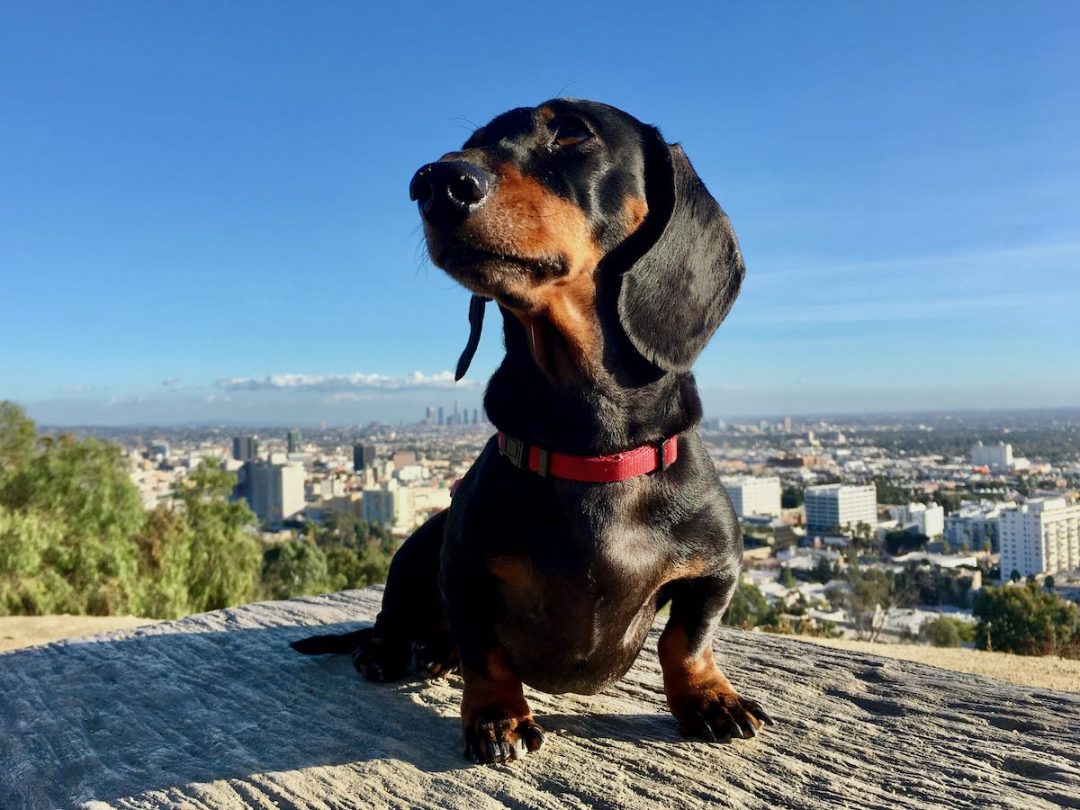 Los Angeles in California is one of the most top cities to visit in the USA. There’s plenty of attractions that have made this city a popular tourist destination, and if you’re travelling in the USA with your dog, you’ll quite likely to pass through this city. So, how dog-friendly is Los Angeles? And what is there to do in LA with a dog?

On our multiple visits to LA, we’ve stayed at two great Airbnbs with friendly hosts. A pet-friendly Airbnb, whether a private room or entire property, is always an option. But there’s also lots of pet-friendly hotels in Los Angeles.

For starters, I’ve previously written about some hotel chains that allow dogs to stay for free (Motel 6, Red Roof and often La Quinta), each of which has multiple locations in LA. There’s also plenty of options for a fancier stay with your pooch. Just hanging out on Rodeo Drive

For instance, the Orlando Hotel, a boutique hotel located perfectly in between West Hollywood and Beverley Hills, welcomes pet visitors. Both dogs and cats are allowed, up to 25 pounds maximum, for a non-refundable $50 USD deposit per day.

Or indulge in the Woof You Be Mine package for you and your pooch, including a Vanderpuff Weekend Box with meals, doggie cologne, treats and diamond-studded toys, discounts for your dog at the neighbouring Vanderpump Dogs boutique and yourself at Face Haus & Dry Bar, turndown service and more. 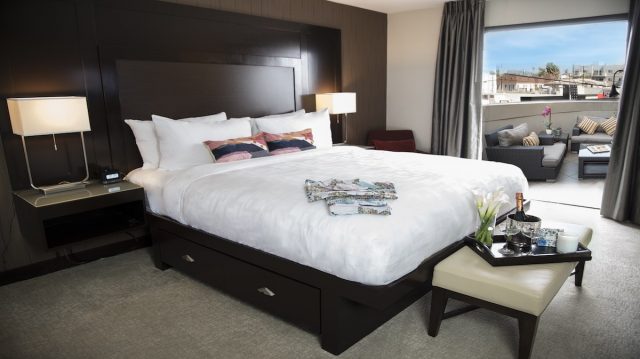 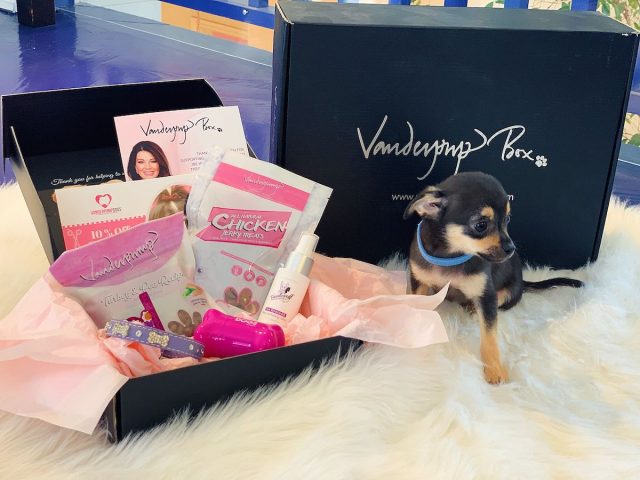 Dining Out in Los Angeles with a Dog

Dogs are allowed to join you on the patio of cafes and restaurants in Los Angeles, although the owner of the establishment has the final say. Not surprisingly, given the number of celebrities residing in the city, there’s plenty of five-star treatment for pampered pooches.

We didn’t dine out often in Los Angeles, thanks to staying in some great Airbnbs with awesome kitchens, so I can’t personally recommend many dog-friendly restaurants. We did visit In-N-Out multiple times, and I was disappointed to not find out until later that they offer a special dog menu item. The “puppy patty” is an unseasoned meat patty, for under $1. Just be warned it is a bit greasy, so it’s best as a special treat, especially for smaller pups. Feasting on a Starbucks Puppuccino

We did however give our Schnitzel a Puppuccino from Starbucks one time when we were stopping by. He devoured down the whipped cream concoction, which is complementary for pet owners. Again be warned that this isn’t a healthy item for dogs, so perhaps just allow your dog a small amount.

Taking a Dog on Public Transport in Los Angeles

While in Los Angeles we didn’t use public transport, as we picked up a car at the airport (and dropped it off again when flying out). There is however a public transport system, known as the “Metro”, with both trains and buses. This map gives a good overview of the system.

The Metro allows small pets on board. Well, there isn’t exactly a size limit, but considering pets need to be secured in an enclosed carrier, it’s not feasible with larger pets. The pet in its carrier shouldn’t block the aisle or doorway, take up a seat (or stop someone sitting in a seat) and of course not interfere with the comfort of other customers. For more information including detailed guidelines on what constitutes a service animal, see this page.

Los Angeles has some great dog parks for your pup to get in some off-leash exercise and socialise with other pups. It’s easiest to search on Google Maps to see what is close by to you.

We were delighted to discover Bluff Creek Dog Park near our Airbnb, which has separate fenced areas for large and small dogs, plenty of grass (much of it artificial, so it doesn’t turn into a dustbowl) and a drinking water stream. It’s a very popular spot on sunny weekends!

Can You Visit Disneyland with Your Dog?

As a first-time visitor to Los Angeles, naturally I wasn’t going to skip visiting Disneyland. However, unless your dog is a service animal, pet dogs are strictly forbidden inside the gates of Disneyland.

However, there’s nothing stopping you going as far as the gates as Disneyland with your dog… In fact, there’s a great reason for you to bring along your dog: the Disneyland Kennel Club, or as we dubbed it the “Happiest Kennel on Earth”! The entrance to the Disneyland Kennel Club

Make sure you have proof of the necessary vaccines. Plus it’s recommended to pop back every few hours to check on your pet, including feeding them and exercising them. (There’s handy relief area inside the kennel.) 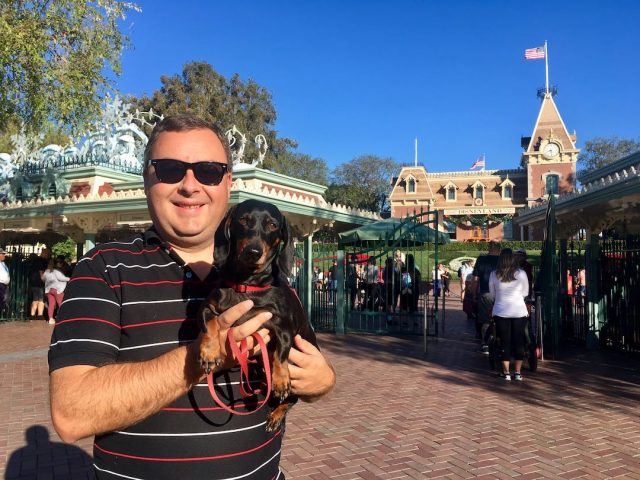 Don’t forget to take a photo of your dog at Disneyland!

Dog-Friendly Things to Do in LA

While Disneyland may not welcome dogs inside its gates, there are plenty of other dog-friendly  things to do in Los Angeles. Check out these dog-friendly activities for starters..

One of the favourite activities of dog owners in Los Angeles, both of the celebrity and regular type, is hiking at Runyon Canyon. Over half of the park permits dogs to walk off-leash (a massive 90 acres out of the total 160 acres). There are multiple walking trail options, many featuring great vantage points with sweeping views across LA. 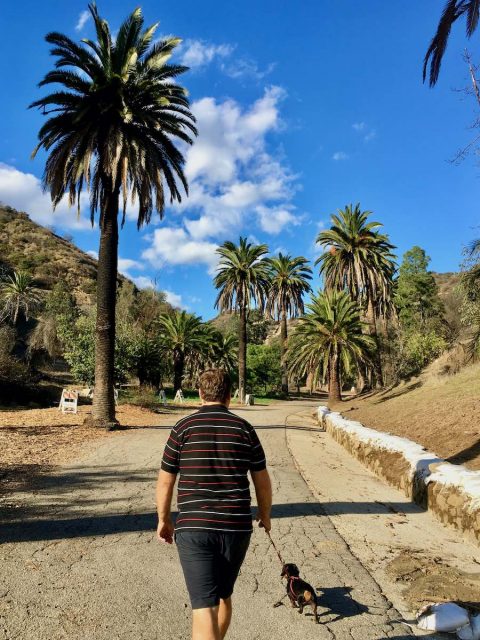 At the southern entrance to Runyon Canyon Park

The southern entrance of Runyon Canyon Park is only a few blocks north of Hollywood Boulevard, and we easily found a free parking spot nearby. Alternatively, head to the northern entrance just off Mulholland Drive where there is a free parking lot. Make sure to take a water bottle on warmer days. 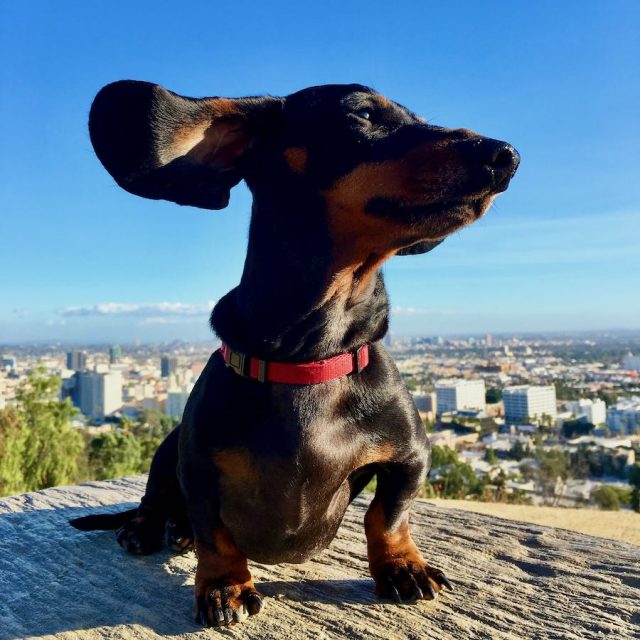 Check out that view!

2. Or Hike Near Griffith Observatory

Another great hiking spot in LA that we unfortunately didn’t get a chance to explore is the park surrounding Griffith Observatory. We headed one evening up to the observatory around sunset, unfortunately at the same time as far too many other people, so we just ended up driving by.

I recommend heading there earlier in the day, parking in one of the carparks then taking one of the many hiking trails on offer, including some to the famous Hollywood sign. Check out the trail options on All Trails. Note that dogs need to stay on leash, except for at the designed off-leash dog park on North Zoo Drive.

3. Visit the Hollywood Walk of Fame

What would be a first-time visit to Los Angeles without a stop at the Hollywood Walk of Fame? Stretching along 15 blocks of Hollywood Boulevard (between Gower Street and La Brea Avenue) and 3 blocks of Vine Street, there are 2600 stars. Schnitzel wondering why he doesn’t get his own star, like Winnie the Pooh

While stretches of the walk can be busy, it’s a fun activity to do with your pup on a leash, walking along and spotting the stars of your favourite stars. Not to mention your pup’s favourite stars! Don’t miss out on also checking out the forecourt in front of the TCL Chinese Theatre with its signatures, handprints and footprints. 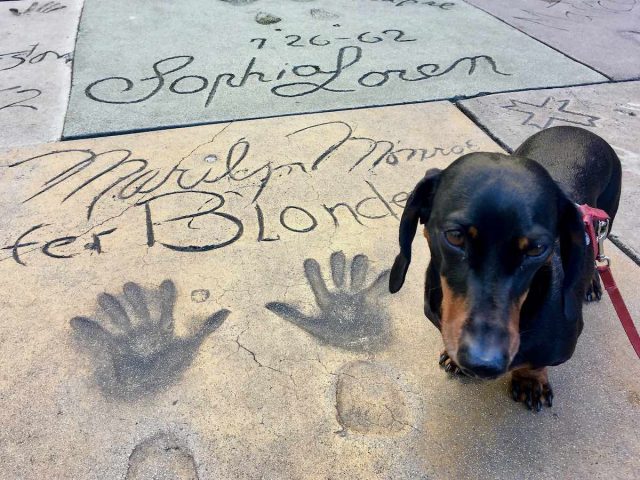 Following in the hand and foot prints of Marilyn Monroe

Even if you aren’t the type to splurge on designer outfits, it can be fun to hit up Rodeo Drive. One of the most famous shopping streets in the world, this street in LA is home to glamorous designed boutiques, with some over-the-top buildings. 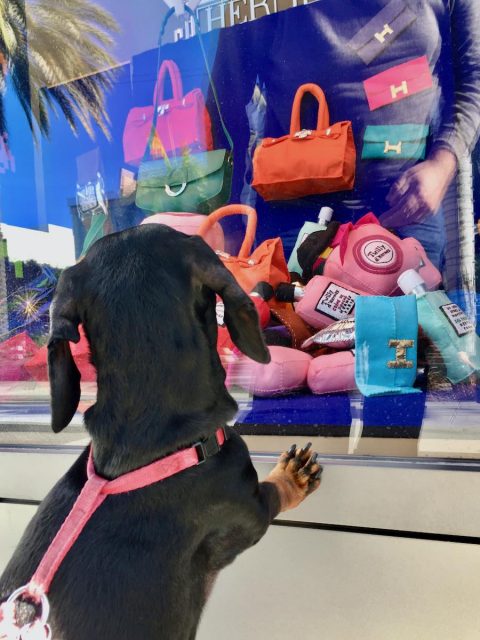 While I wasn’t planning on doing any shopping myself, it was still fun to stroll along the street with Schnitzel at my side, who would have probably been welcome inside some of the boutiques for some fussing over.

If you’re wanting to hit the beach in LA with your dog, there aren’t many options, with dogs banned from most beaches, even if they are on a leash. Instead, head south to Long Beach for Rosie’s Dog Beach or further afield to Huntington Dog Beach. 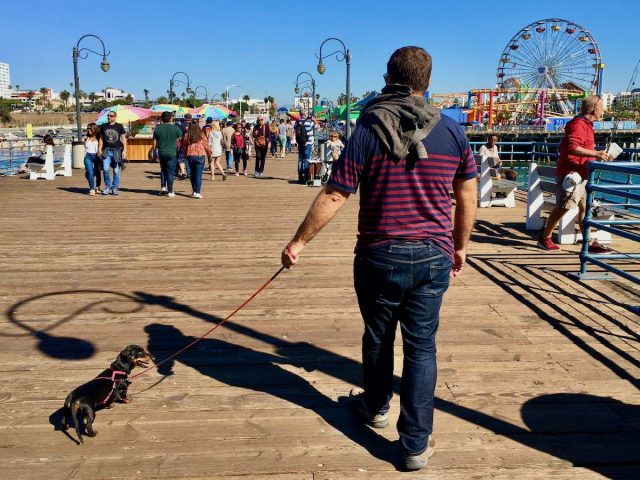 A stroll on Santa Monica Pier with Schnitzel

But it can still be fun to head to Santa Monica with your pup, even if they aren’t allowed on the sand. Take a walk along the boardwalks behind the beach or head out on Santa Monica Pier. Dogs on a leash are allowed on the pier, except for in the amusement ride section. 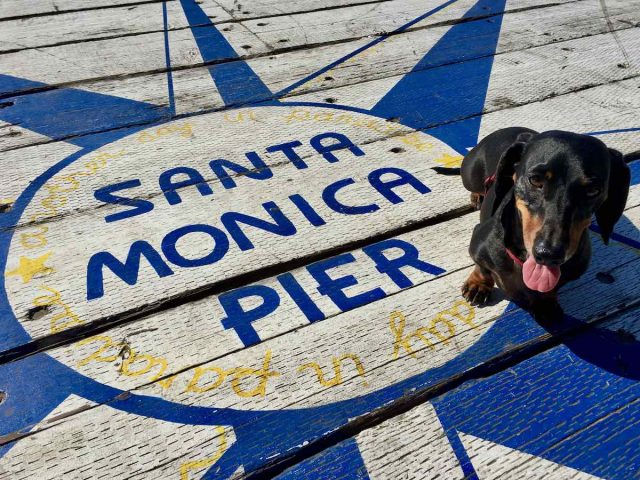 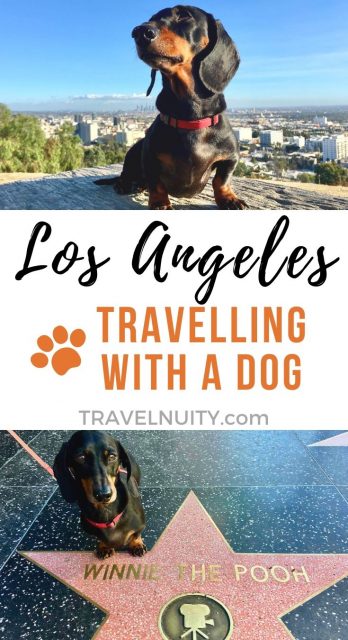 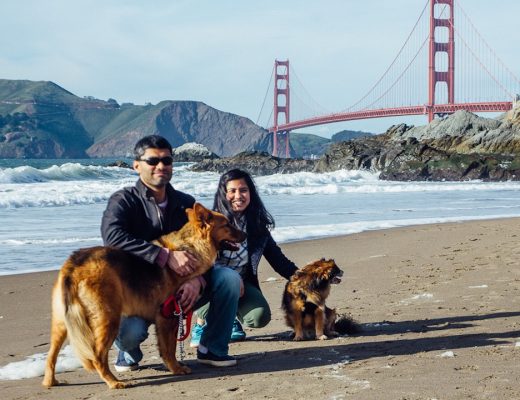 7 Dog-Friendly Things to Do in San Francisco 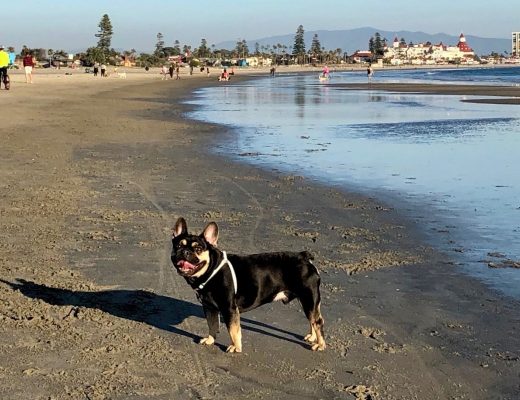