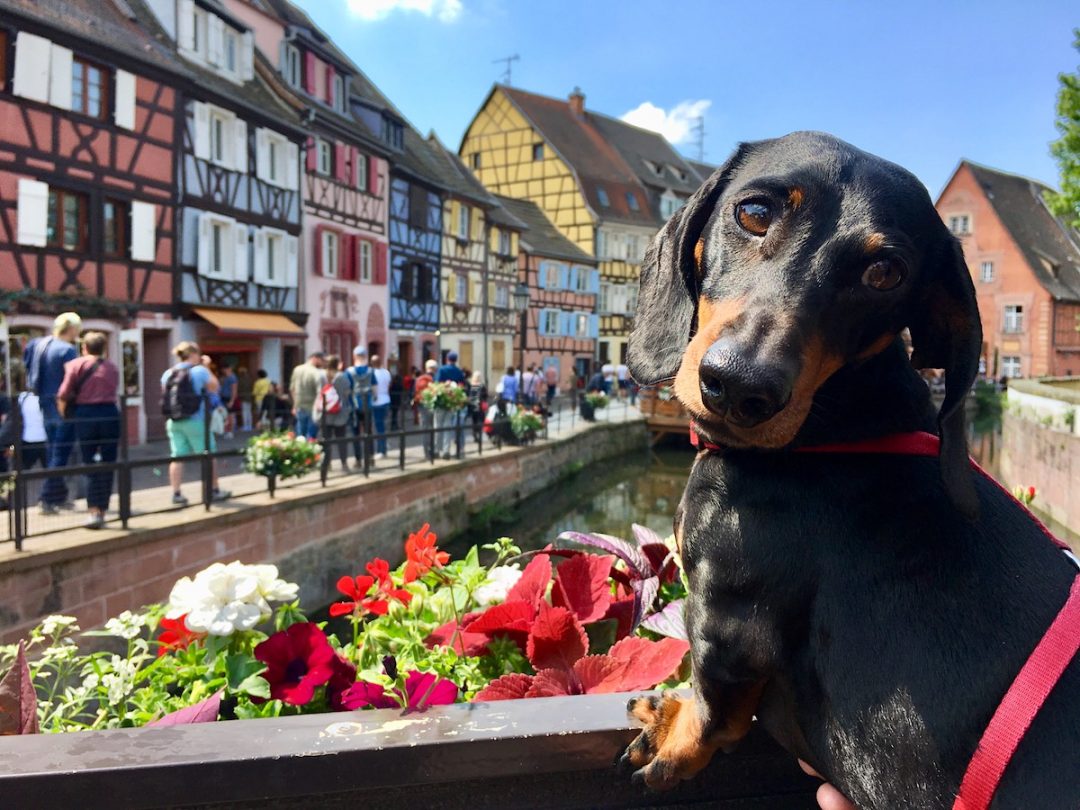 The French have a reputation for loving their dogs. So no wonder then that France is a popular destination for people travelling with their dogs, whether from across the Channel in the UK or further away.

But despite this reputation, France isn’t the most dog-friendly country that we’ve visited in Europe. While your dog will generally be welcome by your side as you sip a wine in a cafe or eat the menu du jour inside, there are some places in France where dogs are strictly forbidden (mainly manicured parks) or technically not allowed (up until recently the case for larger dogs on the Paris metro, although luckily sensibility has prevailed).

So if you’re heading to France with your dog, read on to find out about the ins and outs about travelling in France with a dog.

Preparations to Take Your Dog to France 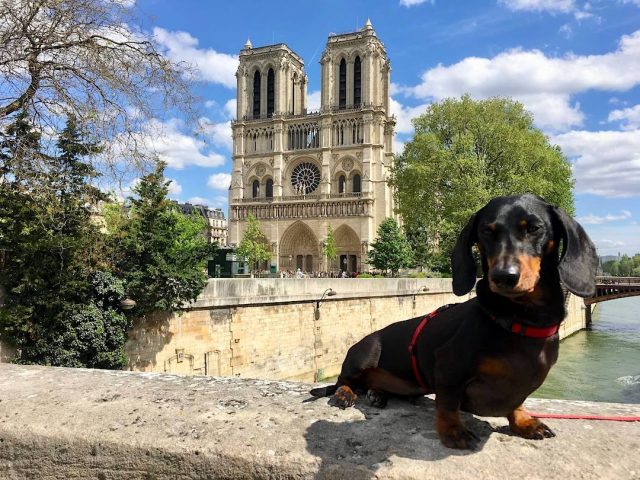 Outside the Notre Dame Cathedral in Paris

Taking your dog to France is easy! The same rules apply for dogs visiting France as for dogs travelling to the rest of the EU (usually microchip, vaccinate for rabies and wait at least 21 days), although usually this isn’t checked when crossing the border into France from the rest of the EU.

Note that restrictions can apply on some “dangerous” dog breeds visiting France – check the note at the end of this post.

Travelling to France with Your Dog

For details on how to take your dog to France, whether from the UK, the USA or the rest of the EU, read my full guide, including transport recommendations.

Dining out in France with a Dog Plenty of cafes in France provide water bowls for dogs

In France, most restaurants and cafes allow dogs to join diners, both inside and out on the terrace. If you would like to dine inside with your dog, it is polite to ask first (unless you see other dogs dining inside). And if the weather is sunny or your dog doesn’t have the best manners, it is more polite to sit outside on the typically large terraces. Over three visits to France, there’s only one time that our dog wasn’t allowed: sitting outside (not even inside!) a kebab shop in Strasbourg.

While travelling in France, we often took advantage of the cheaper lunchtime set menus, found at many restaurants around the country. Alternatively at lunchtime, we often bought delicious baguette sandwiches at the wonderful French bakeries.

As well as bakeries in the centre of town, there’s typically larger bakeries on the outskirts of large towns, complete with car parks, like a French alternative to a fast food restaurant! While the majority of these bakeries don’t allow dogs inside, we found an exception.

The Boulangeries Feuillette chain has multiple branches around the centre of France, including the Loire Valley. While a little more expensive than other boulangeries, it usually had both outdoor and indoor seating (often complete with comfy couches and fireplace!), and our dog was allowed to join us inside at multiple branches. It’s also a great spot to enjoy a coffee and pastry.

Shopping in France with a Dog 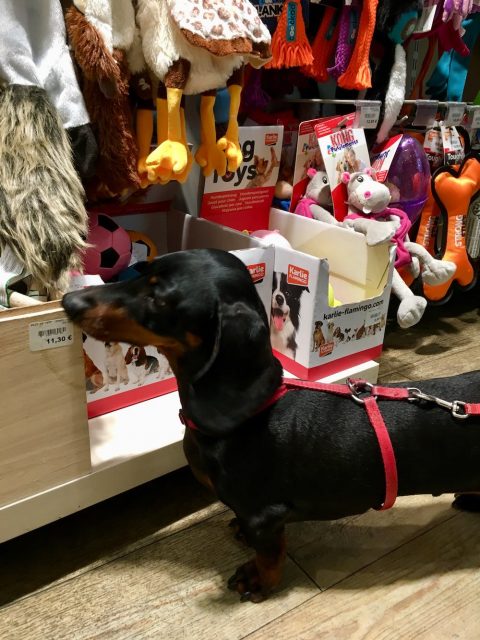 If heading out shopping with your dog, your best bet is to visit small boutiques directly on the streets and pedestrian precincts. Some shopping centres allow dogs, but not all. I must admit that I don’t think that shopping centres are as common in France as some other European countries, or at least I rarely visited any! Naturally, dogs are not allowed in supermarkets.

Taking a Dog on Public Transport in France

This is one area where France has previously not been as dog-friendly as other countries in Europe, although the situation has improved.

In Paris, small dogs are allowed on all forms of public transport (bus, metro, RER (train), trams and funicular) for free, but are meant to be carried in a bag or container. However, in practice, I believe as long as they are genuinely small and not making a nuisance, you can get away with travelling with them on your lap without a bag.

We sometimes travelled with our dog on the metro like this, and saw other small dogs on laps, and encountered no issues.  Larger dogs are only allowed on the metro and RER (train), not buses or trams, must be leashed and muzzled, and require a reduced ticket. For the full rules, click here.

For other cities in France, the regulations vary. In some cities, only small dogs in a bag or basket are allowed on public transport. This is stated in the rules for Marseille and Lyon (during our visit in 2018). In this case, these small dogs travel for free. In contrast, there is no such restriction for Bordeaux, with the regulations only stating dogs must be leashed or transported in a basket. There is also no mention of a ticket being required.

The rules usually also include some terms that the dogs cannot make any mess or inconvenience other passengers. If your dog is also classified as a “dangerous” breed of dog (see the note above), they are also usually not permitted on public transport.

If taking long distance trains, the rules are more consistent. All sized dogs are allowed on all types of trains, except for the Eurostar. For dogs larger than 6kg, on TGV, Intercités and TER trains the applicable fare is 50% of the 2nd class fare (even if you are in 1st class). There are pet-specific fares for other types of trains. Dogs must also be muzzled.

For dogs smaller than 6kg, they must travel in a container smaller than 45 cm x 30 cm x 25 cm. While such dogs usually travel for free in most other trains in Europe, in France there is a set €7 charge. If you have bought your tickets online through one of the many ticketing sites, allow time to stop off at the ticket counter before your journey to buy the extra ticket for your dog. A stylish dog-friendly hotel in Paris

A wide variety of accommodation in France is dog-friendly, from hotels to B&Bs to Gîtes to campgrounds. (In my recent investigation, 50% of hotels in Nice and 37% of hotels in Paris allow dogs.)

If you’re on a road trip, we found that many of the chain hotels located on the outskirts of cities were quite affordable and dependable, plus allowed dogs. This included the chains Ibis, B&B and Campanile. Usually the prices were about €50 per night, not including breakfast, with an extra charge of around €5 for a dog. On the other hand, many fancy hotels also welcome dogs, and will be ready to treat them, for a price of course.

With Gîtes, including those bookable through Airbnb, we noticed that often linen (sheets and towels) are not included, or an extra fee is chargeable for their hire. Keep this in mind if you are not travelling with your own sheets and towels, and double check the details, as you could otherwise get a surprise when you go to check in.

For some of my dog-friendly recommendations, from luxury hotels in Paris to Gîtes in the countryside, click here. I’ve also included some dog-friendly options in my list of romantic Airbnbs in Paris. 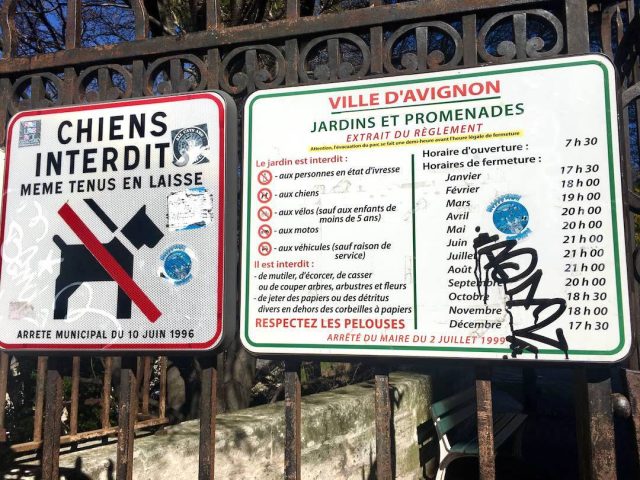 Compared to other countries in Europe, dogs are a lot less likely to be permitted in parks in France, especially in Paris. When we last stayed in an apartment in Paris, there were two parks located on the same street – both of which had clear signs banning dogs at the entrance!

However, dog friendly parks can be found, including in Paris. If you have trouble finding one, ask your accommodation or search online.

Note: As of January 2019, more city parks in Paris will be changing their rules to allow dogs. However, dogs will still be required to be on leash, plus this won’t apply to parks with playgrounds. Fore more details, read this news article.

While there’s no chance of your dog joining you on a visit to the Louvre or climbing the Eiffel Tower in Paris, there are plenty of dog-friendly sightseeing options available for you to visit with your dog in France. We did however find that France is a country where you need to check the rules at each individual tourist destination.

Want to visit a famous Château with your dog? Many in the Loire Valley permit dogs on their grounds, and Chenonceau even allows small dogs to be carrier inside. However, at Versailles dogs are prohibited from the formal gardens, the same at Fontainebleau. 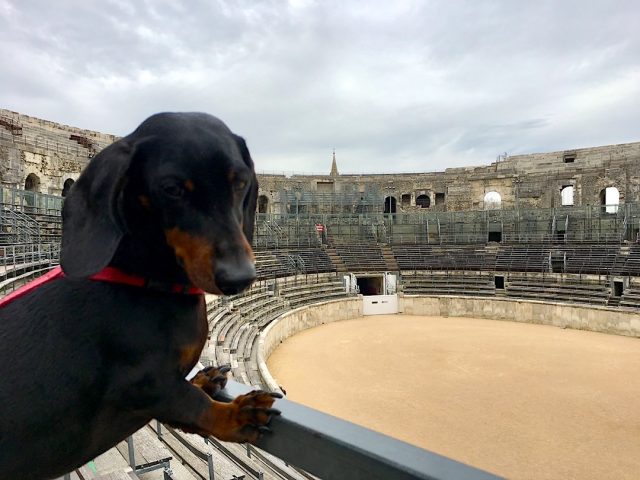 Not all Roman amphitheatres in France allow dogs inside

Even when it comes to Roman-era amphitheatres, dogs are permitted inside the one at Nîmes (or at least Schnitzel kindly was), but not at the one in Arles.

To save yourself the research, I’ve put together a list of 12 dog-friendly things to do in France, covering nearly every corner of the country.

A Note on Dangerous Dog Classifications

In France, some breeds of dogs are classified as dangerous and generally these types of dogs cannot be imported into France (class 1) or restrictions apply (class 2). The rules are not that clear when it comes to travelling through France with such a breed of dog, compared to permanently moving. (If you have experience in this area, let me know!) But be prepared for possible issues, including such dogs may be prohibited on public transport or be restricted when flying French airlines.

These dogs are classified as Class 1 (and cannot be imported):

Thes dogs are classified as Class 2 (and can be imported with restrictions, such as needing to wear a leash and muzzle in public): 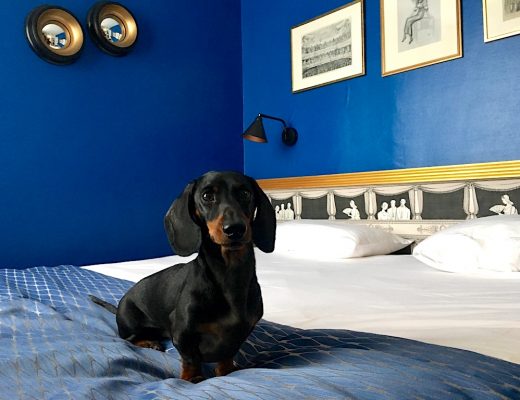 13 Dog-Friendly Hotels and Gîtes in France 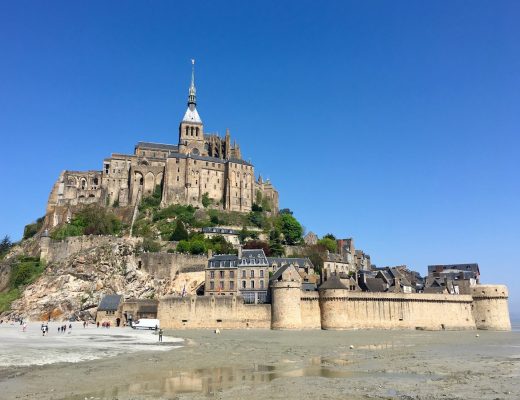 Should I Visit Mont-Saint-Michel with My Dog?